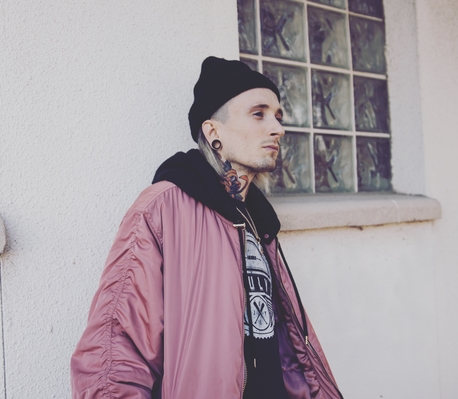 Taabu, born Spencer Heaslip, is a powerhouse, whose diverse skills make this producer, songwriter, engineer and drummer, a diverse asset to all styles and genres of music. In Taabu’s hometown of Dundas, Ontario, Avalon Music Academy marks the early phase of his career. He underwent drum lessons from the age of 5 through 12. His adolescent years consisted of performing and recording, drum doubling in a Canadian Film Festival piece at the age of 11, and receiving nominations at 14 for the 2008 Hamilton Music Awards for “Drummer of the Year” and “Metal Recording of the Year.”

Taabu’s versatile passion flourished from self-taught Metal-core basement recordings, into Electronic Dance focused production at age 17. His growth was followed by the admittance into Music Industry Arts at Fanshawe College. He was a sought after session drummer and performer for the duration of the two year diploma course. EDM, Trap, Dance, Rock and Metal are styles that Taabu felt comfortably creative with upon graduation; this reflects in his more recent work as a drummer, producer, writer and engineer. After taking home 2 awards of his 6 college nominations, and having his tracks, “Friday Night (feat. Loki),” and “Midnight” deemed semi-finalist and finalist in the 2016 International Songwriting Competition, Taabu began working professionally in the music industry immediately following the program (2016).

Today, Taabu is well known for his production with 2oolman (A Tribe Called Red) on Wishy Washy (feat. Omega Mighty) featured on 2019 Polaris Prize winning album, 13th Floor by Haviah Mighty. His versatility has landed his production on tracks with Juno & Polaris Prize nominated Snotty Nose Rez Kids, The Sorority, TWNRVA, Yviona, Valdii, Lex Leosis, Marcio Novelli and Raz. Among the experience of opening for acts like Jazz Cartier, Shawn Hook, Down With Webster and playing alongside Isam B of Outlandish, Taabu is surely leaving his artistic and sonic fingerprint on the music industry.